On whole, 2017 has been a profoundly strange year, perhaps the strangest since 2008. I’ll get into the details below for each section.

We’ve had another record year at Clockpunk Studios in 2017, but I over-worked considerably to accomplish it. I took on too much in limited time frames, and my mental and physical health suffered for it. If we had seen something like 20% growth, that might have felt worthwhile, but it was something more like 3%. It felt like seriously diminishing returns this year.

I still enjoy Clockpunk very much and have no intention of stopping. In late 2017, we added a new major support client, Monte Cook Games. I’ve long been a fan of the man himself, and their new Cypher system is quite enjoyable to play and run. I’m very excited to see what things we will accomplish together.

Having MCG as a major client allows me to reduce the amount of work-seeking I have to do next year. It’s nowhere near enough that I can stop taking on new projects, but it cuts the number of new client sites I have to build to meet my targets in half. This means at the end of the day, I can spend more time working and less time chasing work. It means I can be a little more picky about the kinds of work I do take on, which is important. I had some less than ideal projects this year–not bad clients, but projects for which I wasn’t the best fit, I suspect.

In order to even get to “even” and not lose ground, I also had to raise my rates $5 an hour and the cost of all our support plans. I loathe doing this, because I know if things are tight for me, they’re likely tight for my clients too. But it had to be done, and that’s that. No sense beating myself up about it, and I’m still confident that I’m a bargain.

So in 2018, I expect this area to be a bit more stable, a bit less stressful. A little more 9 to 5, as much as a full time freelance web development business can be (which means, almost not at all). I know I’ll be working on a lot of great new projects in 2018, and I’m looking forward to the challenges.

One last thing – I would be remiss if I didn’t mention that I had Jenn Reese on board for nearly project in 2017 as a designer. I’ve worked with subcontractors before, but Jenn stands out in a class all her own. She’s talented, driven, responsible, and just a lovely person. It is a delight to work with her, and I hope we’ll continue to do so well into 2018.

I can safely say that 2017 was the best year so far in my writing life. I’m just going to break this one down by bullet points, as there’s a lot of ground to cover.

So all that is the good news. The bad news is that, due to personal life stuff, I haven’t written since March. I hope to spend the winter and spring banging out the next Dungeonspace story and a few other ideas I have ping-ponging around. It’s frustrating that in such a good year of publication and sales, I haven’t had time to keep up the work. A lot about being a writer is building momentum, so I’m determined not to lose what I’ve managed to regain in the last couple of years.

My family life couldn’t be better. I have an amazing wife and a now three year old son who is hilarious and kind and just the absolute light of my life. Every day with them is a genuine blessing and no matter what else happens, as long as we have each other, I think we’re going to be okay.

That said, the state of our country and the world sent me into a deep, terrible depression in mid year that lasted months before, after finding myself near-suicidal, I finally sought out a professional to help me work through things. I’ve been seeing her for a few months and I’m in a much better spot, but there’s a lot of stuff to work through. I’m by nature a bit of a negative person, and I’m trying to change that.

I don’t think I’ve ever struggled with the levels of rage and despair that I have in 2017. My own life is mostly fine, but I’m terrified of the direction things are headed in. It’s almost like the external world is reflecting the interior state of my body, too.

I started the year with a diabetes diagnosis which, with diet and exercise, I’ve been a little bit able to limit the damage there, at least for part of the year. Unfortunately, due to the sheer number of hours I’ve had to spend behind a keyboard, I’ve done significant damage to my back and posture, to the point where I’m in considerable nerve pain for most of the day. My insurance, as a freelancer, is fairly terrible, and I’ve been spending over $100 a week on physical therapy, which works some weeks, and others not so much. Typing in particular aggravates things, which may be playing into how little writing I’ve managed to get done. This is all compounded by weight issues that I’ve struggled with my entire adult life.

It’s been hard, given my negativity and the problems, to not see turning forty as the start of a decline in health. I’m determined to stay in the fight as long as I can, but it can be discouraging when the activity you need to do to make a living becomes so painful on a day to day basis. I have my pain mitigation methods, but if physical therapy doesn’t start to show more consistent results, an MRI and surgery may be in my future in 2018.

Finally–a good chunk of my leisure time this year was spent trying to bring a professional DMing company called the Level Up Guild into the world with mixed success. My time and my partner’s time has been limited, and we missed most of our end of the year deadlines. I’m hopeful that in 2018 we’ll find a way to get it up and running, at least in a reduced capacity. I really hope so, because I invested a rather large sum of money and time into things. I’ll talk more about that when/if it’s ready to launch.

I hope you’ve had success and joy in your 2017 as well. I hope we continue to fight the good fight together in 2018. May the Force be with you, and all that jazz. 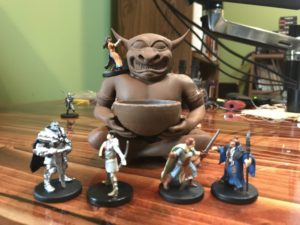