The Narcissist, God, and Me

I am not a believer. If you’ve come here to read an uplifting story about belief, this isn’t the story. This is the story of how my unbelief became concrete for me.

I don’t know exactly how old I was when I began questioning the existence of God. I grew up surrounded by those that believed, and I think there was an assumption at first that anything they told me to be true, was true.

I know that when my mom first told me the story of Jesus’s resurrection, I was disturbed. Even at the age of 4 or 5, I knew that people couldn’t come back from the dead. Still, nearly everyone in my life believed in the Christian God, and while I felt uncertain and agnostic, I didn’t want to believe that the adults in my life believed something untrue.

The church I grew up around was a Pentecostal one, southern Baptist maybe? People spoke in tongues and talked regularly about God intervening in their lives. Church made me uncomfortable, but the music was great. All around me were adults having a concrete, real relationship with this omnipotent being. Their lives were full of miracles.

I challenged God to prove His existence. I silently prayed constantly, claiming “if x happens, then I will believe.” I have a vivid memory of sitting in a bathtub, praying to God to cause the floating bubbles to drift to the left instead of the right. I wanted to believe, but I lacked proof.

I searched for real physical, tangible evidence everywhere. I obsessed over the Shroud of Turin because it felt like something concrete that my budding scientific mind could wield against doubt. I had a framed holographic picture of the face on the shroud. I took it to Show and Tell.

My interest in the paranormal was an offshoot of this quest. I sought evidence of the existence of the supernatural and thus, evidence for the existence of God, even if I didn’t know it then. It wasn’t so much that I personally felt like I needed God, not at first. I wanted it to be true for the sake of my family, for them. Because I didn’t like what it said about them, or myself, to question like this.

My parents divorced when I was in the first grade, and soon after, my mother met and married her second husband, a man I will only refer here to as B. This man was good at first. He knew about rocks and fossils and had gone to college, unlike most adults I knew. He seemed to have a bit of a temper, but I wasn’t worried, not yet.

Over time, B. was abusive to both my mother and us kids. He would scream and shout and call us kids names, and he hit my mom. Sometimes he would shake us or spank us. I don’t remember being hit “inappropriately” like my mother, but I don’t remember B.’s time very clearly. I’ve buried some memories over the years, but there’s one memory of him that stands out as an important moment in my life and my relationship to religion. I have been thinking about it since becoming a father.

B. came home from work and he was angry. Raging angry, shouting angry. I don’t remember what about, only that I ran to my room and hid in my closet. In there, I prayed to a God I didn’t believe in. Protect me, keep him away. I’ll believe in you if you do.

I wasn’t alone. B. was standing outside, listening, only he didn’t hear me clearly. He somehow thought in that narcissistic, rage-filled brain of his that I was declaring that I thought B. was God, and that I no longer believed in him. He stormed in again, forced me up, and shouted again, this time to the effect that he wasn’t God, that was a terrible thing to suggest, etc.

I was baffled at the time. Why would he think that I thought of him as anything but the Devil Incarnate? I knew I couldn’t tell him the truth. I said nothing and eventually he left. I let him go on believing that somehow I thought he was God, instead of the truth, which was that I had begged his God–the one he believed in–to protect me from him, and nothing had happened. No miracles for little Jeremy Tolbert.

I don’t know if that was truly the moment that I became a non-believer, but it was one of the last times I ever asked God for anything with any seriousness. It was probably years before I was willing to admit it.

My life wasn’t all that bad, in retrospect. I couldn’t put it into words then like I can now, but my opinion on gods is simple, and yes, informed by those days.

No god that lets children suffer is worth a single iota of belief or worship. 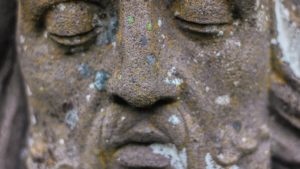 9 Responses to “The Narcissist, God, and Me”