Here we are at the end of our first full day in France, and boy are my feet tired. One unfortunate reality of vacations is that you take your own body with you, and my body is a flaming heap of garbage lately. Much like my childhood hero Benjamin Franklin, I struggle a little bit with gout, which has been triggered by some other medical stuff.  I had hoped to not deal with Madame Gout while in France, but alas, it has followed me here along with other constant companions such as social anxiety and generally just being a fat bastard.

That said, I haven’t had to spend ten hours a day sitting at a keyboard, so my problems seem less significant.  The pain in my foot is mostly under control, provided I don’t tap it against anything too hard, and walking is still possible for the moment.  I’m drinking as much water as I can in the meanwhile, which can help, and I have meds which sorta help.

Today has been a day of rest and orientation. The most important thing we accomplished was finding a local grocery store and picking up some basics.  I was able, early in the morning, to make a quick walk to a small bakery and buy a couple of baguettes which we made our breakfast and part of lunch. I can already tell that we’re going to go through 2-3 loaves of the stuff a day with five of us.  It looks like our general habit will be to eat breakfast and lunch from here in the rental, and then likely head out for a dinner at any of the dozens of restaurants within walking distance.  Tonight, we had hamburgers – not very French, I know, although my burger had goat cheese and fig jam, so at least some of the ingredients were pretty French.  I’m dying to have a good steak au poivre soon.

A two-plus hour nap was sadly in the cards today. I was hoping to beat jetlag with my “stay up really long” trick but I still have some adapting to do, as does little Matty.  The nap felt great though, even if I was woken up every hour by the ringing bells from various churches around town.

Tomorrow is market day, which is renowned throughout the region, and I’ve got my euros ready so that we can stock up on fresh fruit and vegetables and cheese and dried meats and and and… 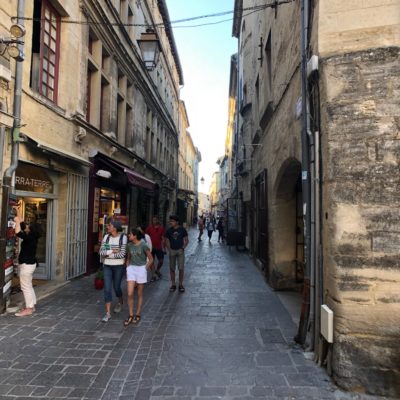