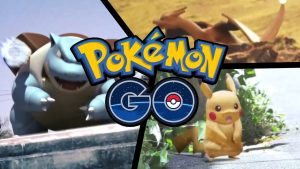 I’m completely hooked so far on Pokemon Go, the latest augmented reality game from Niantic.  For those that don’t know (the internet is saturated with people talking about it this week), Pokemon Go is an augmented reality game that you play in the real world. Using GPS, the game spawns various pocket monsters that you can capture and add to your collection. Supposedly, different types of monsters spawn in different areas.  For instance, water-type pokemon are found near rivers and lakes (although my limited play time has not supported that idea).

Instead of sitting at home to play, you must walk or bicycle (the game detects if you are driving by speed and will lock you out for safety reasons). When you go to capture a monster you have encountered, your camera shows the real world around you and the game projects a 3D monster into the scene. You throw pokeballs at the monster with your finger to capture them.  It’s a very basic mechanism, completed quickly, but very immersive, and makes the little monsters come alive in a way they never have before in the dozens of previous Pokemon games.

In addition to the monsters to hunt and discover, there are two types of permanent locations on the overlay map. There are poke stops, which you can visit every 5 minutes to receive in-game items like potions to heal your monsters and poke balls used to capture the monsters. There are also gyms, which is where the main competitive element comes into play.

When you get to level 5 with your character, you are asked to join one of three teams. These teams then compete to control the various gyms around town. You use a team of your monsters to attack monsters installed in a gym. If you win, you take it over for your team, and each day you control a gym, you get rewards to make your monsters better.

There are more intricacies involving monster evolutions and power ups and such, but I won’t bother digging into those here. The main thing you do is walk around, capturing monsters, getting stuff from poke stops, and attacking gyms to take them over for your team.

The launch has not been without problems.  The company making the game, Niantic, has struggled put up enough server infrastructure to keep up with demand.  They previously made another augmented reality game called Ingress  The game chews through your phone battery like nothing else I’ve ever used.  There are crashes and hang-ups galore in the game.  But none of that is anything more than a mild inconvenience.

This blurring of reality and gaming provides all new incentives for activity and socialization.   Reddit’s subreddit for the game is full of stories with people getting in trouble at their jobs for playing, nearly having accidents, making new friends, and even making dates.  Because it’s a massively multiplayer game in the real world, as you wander around traveling to the locations, you will encounter other players in the real world.    And then there are the odd-ball stories like the girl who found a dead body in Wyoming while playing the game.

Augmented reality gaming is not just a technological phenomenon; it’s also a sociological one.  It will be fascinating to watch how it impacts the lives of the players over time, especially as the game becomes more stable.

I live very close to a small college campus, and there about 8 poke spots (corresponding with important historical markers, public art, and buildings) and three gyms within my usual walk circuit. I’ve taken to making a loop to hit things up and catch monsters along the way. Maybe adds 10 minutes to my walk time, and seriously boosts my step count on the fitbit. Being distracted helps me tolerate the heat, too. I’m sweating horribly, but I don’t notice.   I was already walking regularly, but this has added at least 3000 to 4000 steps a day to my counter since release.  I am busy looking around for new places around town to walk so I can expand my collection.  I’ve not talked with any other players, but I see them everywhere, and it’s only a matter of time until I end up in a conversation with them, exchanging tips and talking about our best monsters.

As a science fiction writer, I’m (of course) speculating about how these experiences will change with improved technology.  Even with the clunky interface and overlay of a camera phone, the game really triggers a sense that there’s a hidden world of creatures all around us.  I’m imagining how much more immersive this experience will be when we do not need a phone to provide the visuals, and instead wear special glasses.  Google Glass, only way better.  Microsoft’s HoloLens would probably be an example of the next step in interface.

Virtual reality, to me, presents a large number of difficult-to-solve problems involving basic biology and physics.  Augmented reality circumvents a lot of the spatial problems by using real world space.  No need for virtual walls or struggling to overcome nausea with higher framerates.   Augmented reality will present its own unique problems, too, of course.  Especially this:  what are non-players going to think of those who are playing in public spaces like Pokemon Go encourages?  There will likely be some backlash, and soon, at least temporarily.

Ultimately, if you’re interested at all, you can download Pokemon Go from an app store.  It requires a pretty new phone–with Apple, at least an iPhone 5.  It remains to be seen what kind of longevity the game will have, although Niantic appears committed to developing deeper game mechanics and general improvements.   Even with the problems now,  I’m finding it to be incredibly entertaining.  Give it a try if it interests you at all.  This could be the next stage of something pretty big.  And if it helps you stay fit? Even better.