#RPGaDay 9: What is a good RPG to play for about 10 sessions?

Oh, I like this one.  This is the kind of thing I can sink into.

Ten sessions is a great length for any game that doesn’t have a focus on power progression and leveling up. If we compare sessions to television, what we get is a ten episode series or season. This is a really great length for creating a story arc, in my opinion.  Longer, and you have too much filler.  Shorter, and some characters might not get an opportunity to be in the spotlight.

So, let’s talk about games that don’t have a strong focus on power progression (like, say, D&D or Earthdawn does).  GURPS would be a good system for a game that doesn’t require characters to level up. That’s a classic, but I often find the mechanics a little too fiddly.  Half that game seems to be creating a character with the points buy system.  I haven’t played GURPS in probably 10-15 years, to be honest.

Another thought would be Savage Worlds again.  If I was looking to run something rules light and fast, with a focus on story, I’d definitely default to Savage Worlds because I’ve had a lot of time to really get to know it, and it’s a “setting neutral” system that doesn’t force a lot of world building on you. I like to do my own world-building.

Another idea might be the Cypher System.  I’ve only played this in the form of Numenera, but I really liked the emphasis on freeing up the GM to focus on managing the game and the story.

But let’s go old school.  I think if I had a group of people willing to commit to a ten session campaign, I would spin up a game of Mage in the World of Darkness.   Mage has one of my all time favorite magic systems, and the world building isn’t so detailed that I feel completely boxed in and unable to tell my own stories.  Characters don’t really have a huge emphasis on getting more powerful, so you don’t have something like “oh, now we have level four spells and everything about this adventure is cake now” to worry about in your planning.  (Seriously, I hate designing encounters for high level D&D play.  There’s just so much more you have to think about).

I’ve run a lot of short campaigns of Mage, and it has allowed for some of the wildest and most imaginative play I’ve ever had.  I know the ins and outs, although I may be a little rusty on the various magical traditions now.  And when I say Mage, I mean Mage: The Ascension, not whatever form it’s mutated into now.  I don’t want to play Mage with spells; the free form “spheres” magic system was the best.

Whew, thanks for taking the long way around on that one with me. 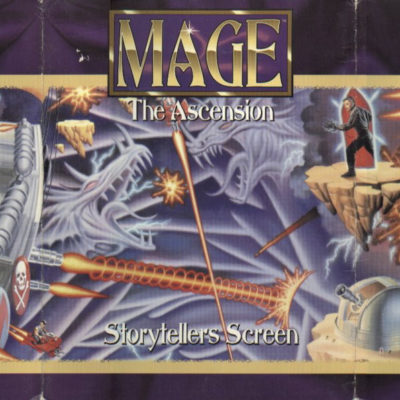