#RPGaDay 29: What has been the best-run RPG Kickstarter you have backed?

I’ve only backed two RPG Kickstarters in recent memory:  Tales From the Loop and Numenera.

I found both to be very effective, well-run campaigns.  The key for me as a backer is constant updates and communication.  Unlike some, I know that I’m backing an aspiration, not a product when I fund a Kickstarter.  Sure, I really want the thing, but I know that sometimes I might not get it, and I’m usually taking that gamble into consideration when I back something.  I don’t back nearly as much as some do because of this, but to each their own comfort level, I say.

Tales From the Loop is a game I really would like to get on the table for a one shot at least. It has the makings of a really fun 80s YA adventure, something like Stranger Things.  That’s not to mention the amazing artwork and world-building by Simon Stalenhag.  I’ve already blabbed at length about Numenera, so I’m going to give this one to Tales. 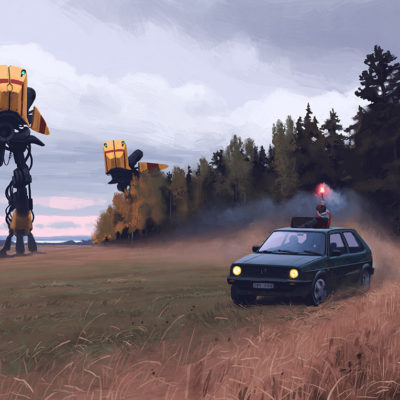 Numenera, RPGaDay, Tales From the Loop

#RPGaDay 22: Which RPGs are the easiest for you to run?

This one is no contest.  It’s Numenera from Monte Cook.  Monte is a GM’s GM, and his system of making the players do all the dice rolls so that the GM can focus on managing other things is brilliant. The mechanics are designed so that figuring out difficulties for rolls is dead simple as well.  I found Numenera by far the easiest system I’ve ever GMed. I picked it up and was comfortable with the system an hour into my first game.  And that setting allows me to really fly my freak flag.  Weird, far future stuff is a blast to write up and run.  My notes were never more than a handful of paragraphs for a session in this game.

It’s lacking in other things (a strong sense of character progression, in particular, which a lot of players want), but as far as ease of GMing, nothing beats it.

Can I plead the 5th on this one? Truth is, I am not great at evaluating general writing, as a fiction writer.  I can evaluate the fiction parts in RPG source books and almost none of it is very good, in my opinion.  No offense.  It’s usually too short to actually accomplish more than adding some setting flavor, so I can’t fault it for that at all. And for what it aims to do, it’s usually great.  The ones I remember best are from the World of Darkness titles.

I think there are two RPGs that come to mind where I noticed the overall writing specifically:  5th edition Dungeons & Dragons and Monte Cook’s Numenera.  Numenera is written in a great, easy to read style and doesn’t get as dry as some games can.  5th edition D&D made a really interesting, inclusiveness attempt that I think modernizes the rulebooks.  Not only in the writing, but the artwork as well.  It makes D&D feel like a game for something other than teenaged male nerds, which makes me immensely happy.

#RPGaDay 4: Which RPG have you played the most since August 2016?

Actually, honestly played?  Well, almost nothing.  This is something I would really like to change.

I had a campaign going of Monte Cook’s Numenera for a couple of months in 2015, but this game fell apart in the usual ways.  Players stopped committing to showing up.  Schedules got the in way.  Lives were re-prioritized. I was really disappointed, but there was no use in trying to keep it going. I let it die off, and I’ve been unable to organize a game since, despite trying a number of times.  I’ve had people tentatively commit, and then back out.  Perhaps I’m not a very good game master, or I’m a difficult person to play with.  Or perhaps it’s just the way people schedule their times these days.

P.S.: I really enjoyed Numenera quite a bit, and I hope I get to play it again some day.

As I push 40, I’m finding it increasingly difficult to find people with similar interests who want to commit the kind of regular time it takes to developing a good campaign.  I find playing any less than twice a month results in a disjointed experience. The ideal time frame is once a week, but even I find that difficult, and that’s with a relatively flexible schedule.  I rarely try to schedule anything consistently anymore due to people’s lives being what they are.

For years now, I’ve found it far easier to get together temporary and ephemeral groups of people together to play board games; I can’t be the only one having this trouble, either.  When I was younger, board games were a much smaller hobby, but these days, they are probably the fastest growing section of tabletop gaming (citation needed).  I own dozens of board games that have seen consistent play, and probably nearly as many RPG books that are in mint condition because they’ve only been paged through once or twice.

If there’s one thing I really want to change in 2018, it’s that I want to develop a group of people who are as passionate about playing role-playing games as I am.  I want to find a regular group willing to set aside a chunk of their lives to experience a good, exciting story with a few other people who are equally committed.  If I’m being honest, it feels about as likely to happen as discovering a unicorn grazing in my back yard, but I’m not going to let that deter me.

The other way this is changing is that I’m starting a new company on the side of my usual business involved in developing really elaborate, tabletop D&D experiences.  Basically, an organization aimed at running professional games, with top-tier tools and resources, and dedicated to providing support materials so others can do the same.  If that goes well, i’ll be getting my fill of regular D&D games in the latter part of 2017 and into 2018 and beyond.  I don’t want to talk about that idea too much yet, but you can be sure you’ll read more about it here as our plans develop.