Ready Player One wasn’t unmitigated garbage, but it wasn’t that plausible either

I finally got down to the local cinemaplex to take in a viewing of White Nerd Fantasies: The Future part one.  Based on the general backlash to the book that’s been circulating online, I expected that the movie would continue the weird 80s nostalgia excesses of the book (which I frankly loved, despite acknowledging its problematic aspects). The book and the movie don’t share a lot of similarities in that regard.  The soundtrack seemed to be the primary place that called out the 80s. There were plenty of more modern references and cameos to be seen as well but I think visual references seem a lot less obnoxious than those on the written page.  I expected to find a much more off-putting movie than I did, so I was pleasantly entertained, and indeed, part of me was thrilled.  I’ve had a personal fascination with virtual reality since the 9th grade, when I spent the year writing a research paper on it. I’ve waited my whole life for virtual reality to be taken this seriously, and it took seeing it up there on the big screen to realize just how ridiculous a future including something like the OASIS really seems.

The first barrier you’d have to get over for wide-spread adoption of something like VR as depicted in this film is the “ridiculous” effect.  People participating in VR look absolutely insane to those who don’t have a screen strapped to their face. The movie played up this effect to great impact, intercutting between dramatic action-filled moments in virtual reality with the real world ridiculousness of people in black lycra suits waving around frantically.  Not impossible to overcome, but definitely something that hampers the development of an OASIS.

The second barrier is the idea that anyone would spend that much time playing the same thing for more than a few months. Take a look at the “free to play” games list on Steam sometime.  There are hundreds, if not thousands, of games on there, some of which are being played at any given time by sixty people at most.  The diversification of options means getting a large crowd onto the same service or “planet” or whatever you want to call them seems impossible and absurd.   There would be a dozen or more OASISes and most of them would look like ghost towns.  An awful lot of people would be holed up in private creations, probably.  IOI would have just created their own competing simulation platform.

Also,  the film kind of portrays a wide web of people who seem to ignore those closest to them in favor of distant connections.  While this is a life some of us do indeed live, the majority of people use the connectedness of the internet and social media to stay in touch with people that live near them, that are already important in their lives.  Not an awful lot of people seem to use social media to connect to random strangers.  They use it to reinforce the bonds they already have.  So social media, not gaming, makes up a good chunk of internet usage.  We don’t really see that in this future.  Perhaps it’s there off camera?

Virtual reality, as I grow older, seems like the bizarre fantasy of social misfits and shut-ins who want to be isolated, but still have life experiences.  “Wouldn’t it be great if we could climb a mountain without actually leaving our house?” Why would that be great?  I understand the appeal if you are, for instance, disabled, but for the relatively average person, I suspect the experience will always pale to the real thing because as Halliday says in the movie, it’s not real. Realness matters and will continue to matter until they’re plugging our brains directly into a simulation, which I’m not sure will ever truly be possible (but who knows).   It’s like androids. Androids don’t make much sense to me except in a few rare instances.  Why make artificial people who are indistinguishable from people when you have a surplus of… actual people around who could really use something to do?

Don’t get me wrong – I still see utility in virtual reality as a tech innovation, and maybe one day I will actually own my own gear, but I suspect it will mostly be a niche experience.

Finally, my main complaint is that the future in the film projects the apathy of Generation X onto new generations that have as of yet not displayed any of the apathy that seems necessary to give us the RPO future.  Today’s teens seem far more engaged in trying to change the world than the rest of us.  That alone makes RPO’s future seem pretty implausible.  The #NeverAgain kids are pretty unlikely to lose themselves to spending all their time playing games on Planet Doom.  The kids are alright.  I don’t think they’re going to let this happen, and I for one look forward to how they’re going to make visions of the future like this one utterly obsolete. 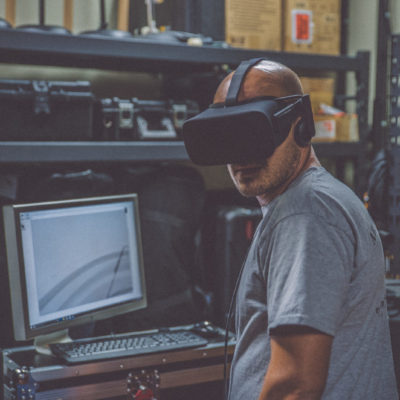