#RPGaDay 28: What film/series is the biggest source of quotes in your group?

We geeks love our quotes, don’t we?  In my early days (grade school), I would say that everything Monty Python dominated the quote game. There were probably other things here and there, but predominantly, what people around me quoted was this.  I had seen almost no Monty Python, however, so much of it went over my head until later in life. I still remember the first time I saw Quest for the Holy Grail. I came in on the catapult scene, and had no context for what I was watching, late one Friday night; My brother and I laughed so hard, we woke up everyone in the house and got in trouble.

By high school, it was probably Star Wars and the like that dominated the quotation wars. Python was fading except among the quirky theater nerd set, I found, in favor of something my generation had actually grown up with, instead of those older than us.

By college, it was solidly the Simpson, leading into Futurama, with a few odd movies thrown in, like the Princess Bride.  On of my highest moments of film-going was seeing a quote-a-long of Princess Bride in college where the entire theater of 300 students knew every word by heart.

These days, it’s probably a mixture of all of the above, and maybe quotes just don’t get slung about the way they did before.  Of course, I don’t have a regular game and don’t get to play often at all.  I like to play with clever, funny people, so a lot of the quotes I remember are actually original quotable lines that made me laugh.  A recent one, said by Liv to a player who was an android that couldn’t roll very well all session: “You’re like the Windows 95 of terminators.”  That one nearly had me in tears. 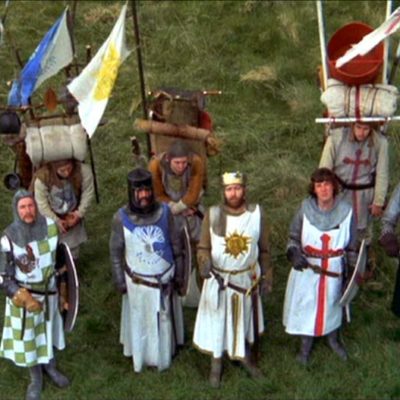