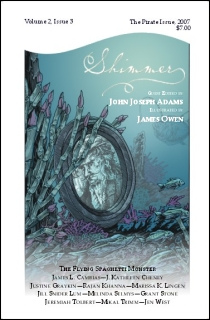 In the Magic P1r4tes setting, computers can process spells like programs.  The only problem is, copyright of spells is tied to the life of the wizard that created it, and wizards live forever.  What’s a young wizard to do?

Unfortunately, the Magical Association of Atlantis, (MAA, or, Big Mother) are in the fight against magical piracy.  When they find out about the existence of a spell that is the ultimate in copyright protection, the race is on to secure the unduplicatus.

Captain Blood, ‘leet most high of the Mystical Order of the Buccaneers, was dead.  Or so said a daemon-posted blog post on his hidden website at 4:42 PM.  And whether it was true or just some hacker hoax, it was major bad news either way.  Either he was dead, and that sucked, or our enemies had cracked his defenses and wanted everyone to believe he was dead.

I logged in to my desktop and checked the status of my firewall sprogs–all clear–then started hitting the tracker sites looking for weapons.  One of the Swedish-scene cabals had uploaded a Truename-enabled summoning sprog for a daemon from theMalleficus, so I jumped on the torrent and watched it trickle down to my hard drive.  I tried connecting to my cabal’s IM server to see what our plan was, but the server timed out.

That made me nervous. I cursed under my breath.

Also In This Series